Parasites – What they are and What To do About Them People are widely misinformed about Parasites as they are very common in the United States. Almost 50% of Americans have parasites, although we can presume the number is much higher. When people think of parasites, they tend to think of them as worms like Tape Worms.
However, that cannot be further from the truth.

Yes, some of them are giant worms, but most are microscopic worms invading the body. People with chronic illness are usually more susceptible to parasites. Like we discussed, all parasites are not giant worms, some example are as follows, Pinworms; which come out at night,
Giardia; which is contracted from Dogs, Protozoa, etc.

You can also get infected from insect bites, from eating raw fish like sushi, eating undercooked meat; especially pork, walking outside barefoot. The microscopic parasites can get into any untended open wounds. You can also contact them from your pets.

One can tell whether they have a parasite or not by following the below signs that the body might exhibit. 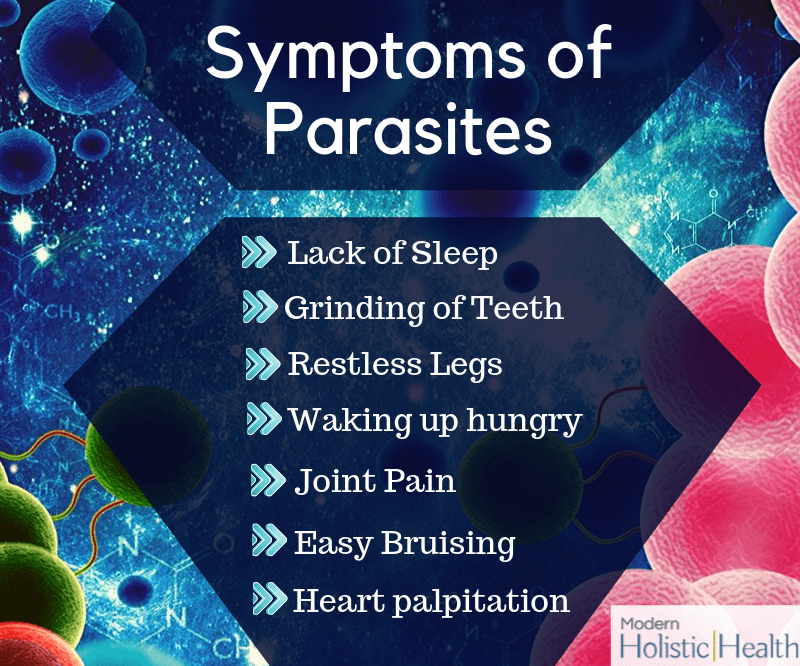 Anyone of these or a combination of any or all of these can be indicators of parasites in the body. A parasite can put out biofilm. Biofilm is a protective slime that protects them from our immune system. Biofilm can make a protective home for the parasite to live in the body. This accelerates the growth of parasites in our G.I tract, and it will allow bacteria, fungus, and other infections to
go into the biofilm and reside alongside the parasite.

The way to effectively combat this is to increase our parasitic cleanse during the full moon.

There are a lot of holistic remedies to effectively fight parasites, some of which can be found in your homes. All of these remedies work fantastically in eliminating the effects of parasites. They are as follows:

Black Walnut extracts have antibacterial properties and are used extensively in wormwood complex supplements. Black walnut thus can kill parasites as well as treat parasitic worm infection like diphtheria and syphilis. Black walnut extract can be used to gargle and put it into the skin to treat wounds.

A study found that tea tree oil at varying concentration was effective in killing lice within an hour and its eggs within 5 days. This result suggests that tea tree oil can effectively eliminate a parasitic infection like scabies.

Oregano oil has a long history of medicinal uses. A study has shown that taking 200 milligrams of oregano three times a day for 6 months can eliminate parasites that cause bloating, fatigue, diarrhea, and constipation.

Grapefruit seeds are potent sources of antioxidants and antimicrobial properties. The bitter seed is a perfect cleanse for the smooth functioning of our digestive system. The seed can clean off bacteria, fungus, and harmful parasites. Clove oil contains the powerful eugenol oil, which has been researched to eliminate pathogens in the gut. It is also found to dissolve eggs left behind by worms. It is believed to be the only oil that eliminates all kinds of parasitic eggs.

A distant relative of peppermint, Curled mint has been researched to show the potential of relieving people from the symptoms of Giardia and amoeba infection. It also eliminated parasites in most cases.

Coffee enema are colon cleansers used by holistic practitioners. During the procedure, a mixture of coffee enema is inserted into the colon through the rectum. It helps in detoxifying the body and helping with constipation, boosting immunity, and increasing energy.

Parasites are interesting to test. We can look for them in the blood, we can definitely rely on the symptoms to correctly identify the parasite in question, and a stool test is also an effective way to test for parasites.

Although testing for stools does not always mean accurate results, parasites are tricky little creatures; they will not be found in all stool samples, because they don’t always release in the stool unless they are dead or dying. If they do die, they will dissolve themselves. We can, however, on our own intuition use the above antimicrobials and home remedies to help relieve the symptoms of parasites in our body.